Let me start by saying I'm sorry.  I've not been visiting your blogs lately, and I miss you, and I do have a note from the doctor excusing my absence. 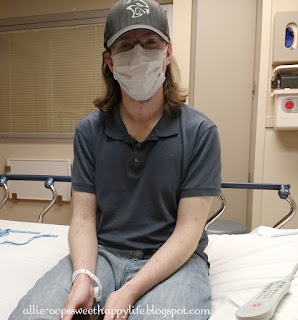 I mentioned last week that Sam and I weren't feeling well.  Guess what?  Sam has chicken pox!  He had been getting the cold sweats, and told me he thought he was getting acne from it - I was feeling so poorly that I didn't take a good look at him until Thursday night, when he got home from work, and told him that it wasn't acne....he went to Urgent Care on Friday morning.

They gave him an antiviral drug to take, and symptoms that would require a visit to the ER.  He came down with those Saturday, so off to the hospital we went.  After much blood work, a CT scan, chest x-ray and spinal tap, they determined that the virus hadn't gone to his brain fluid, but kept him anyway.

They gave him lots of fluids, potassium, and the antiviral drug through the IV.  He had a huge room all to himself, his nurses came in wearing masks hooked up to oxygen hoses, [they looked like beekeepers] and finally got to come home Monday afternoon.  All of his meals were brought in take-out containers, with even a styrofoam tray, so that nothing had to go back to the kitchen.

I get antsy when I'm stressed, need to be doing something, so I re-arranged my sewing room again.  Yep.  I had been sitting in my chair, feeling poorly myself, and wishing I could just lay down - so off went the chair and the couch came back. 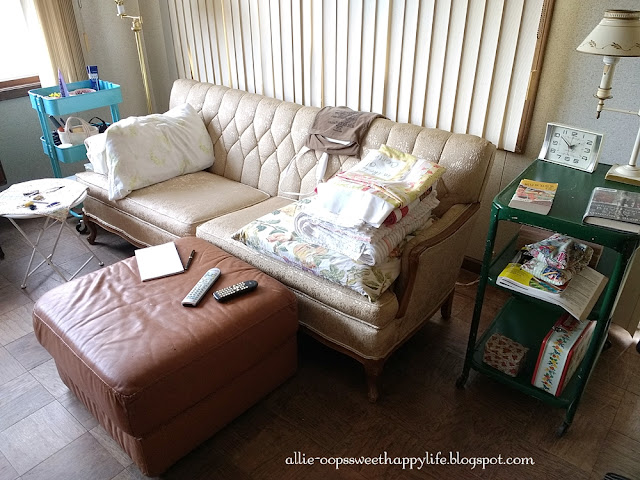 The really, really big bonus is that I now have my U-shape back for sewing - ironing, sewing and cutting tables are close and handy. 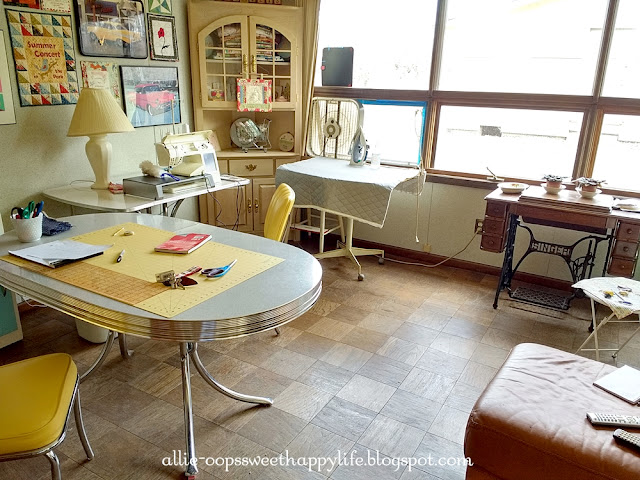 And the back wall, where there isn't much light, now houses my computer desk.  Still have to hang a wallhanging there. 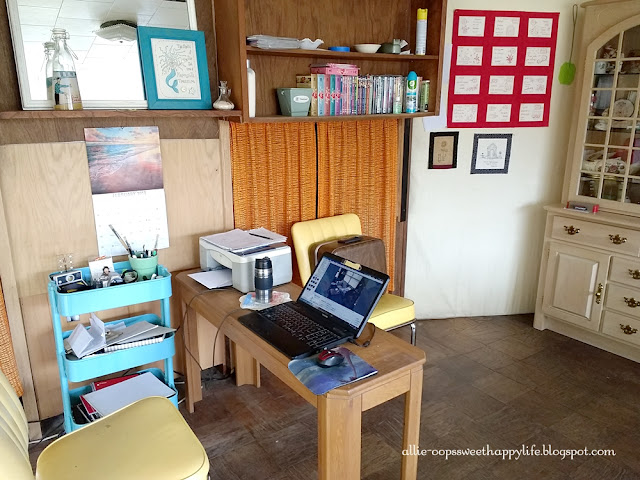 I'm happy, and wondering why it only took two years to get this right.

Sam is mending, and spring is on the way, I found some flowers in the front flowerbed the other day. 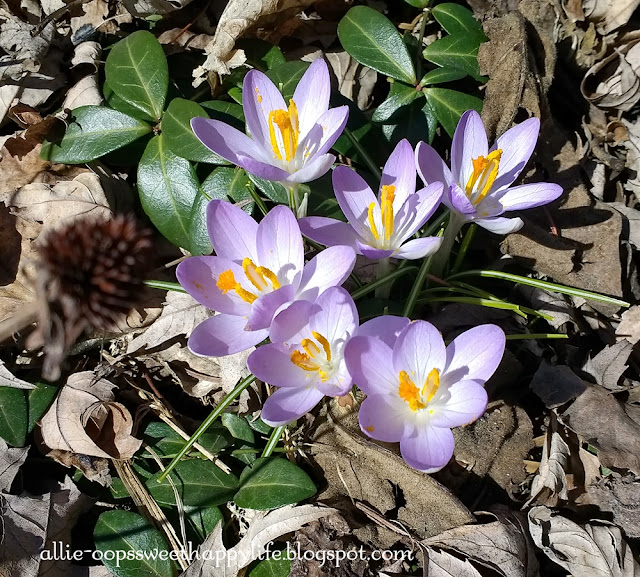 Don't know what they are but they're pretty, and will probably get covered with snow at some point - we're not into April yet!

I'm still praying my oldest son doesn't get the chicken pox, he was exposed last Wednesday, and the incubation period is 10-14 days.  He no longer has insurance, so it would be more of a hardship for him - we'll see!

I'm not sure if I've had chicken pox again or not, our symptoms were so similar except for the spots.  I had one spot, so I probably did.  They told Sam he'll be weak and tired for about a month...he got hit so hard.  I seem to be doing well but get awful tired in the early evening, and that couch sure is nice, lol!

I've started over in my blog reader - hopefully I'll be able to keep up with you all now.  I miss you like crazy.  See you soon!

My kids had chicken pox but they both had just a mild case as they'd had the shot for them. Those are crocus...they'll withstand the snow if they have to! :0)

Who would have thought that it would be the chicken pox! Poor baby. I do hope your oldest son doesn't get it. Such a pretty crocus, it's have come to cheer you.

I didn't know it could get in the spinal fluid...:( Glad he is doing better.

Hi Allie hope your boy and you are feeling better real soon. Love your lovely big sewing room and how comfy does your couch look,take care my friend xx

Dont apologise - goodness me!!! These 'childhood' diseases are not fun as adults at all.... hope all is well at home and you are less stressed now.... but your sewing room does look lovely. I think your pretty little flowers are a crocus ....
Hugz

So glad your boy is better. It's so much harder to get childhood disease when they are older. Hope you are all on the mend.

My those chicken pox hit your son hard. I didn't realize they could cause problems serious enough for hospitalization.

I hope you don't have or get it, but maybe it is a mild case and just tiring you out. I hope you feel better soon.

Yellow crocus!!! Grow them by the thousands and pick the saffron!! Keep well, have your new sewing room layout the way you want and need, and I send a heap of wishes for you all to be well, really well, very soon.XXX

It sounds like you've both had a terrible time! Continue to get better and yes, maybe you'd better let your mother keep going on her own. I wonder where Sam caught chicken pox to begin with...

Wow! That sounds serieus! I never heard about adults getting the chicken pocks.
Hope the rest of your family stayed well. Hope your Son feels better soon.

Sounds like you and your family are on the road to recovery. Full recovery will take a while, so be good to yourself and take good care. Your sewing room looks very inviting--I'm ready to move in and sew awhile. Enjoy the pretty crocus--Spring is coming...

Take care of yourself and Sam - and I so hope your older son does not get the chicken pox. It seems chicken pox is worse when you are an adult. Will be thinking of you all.

My daughter gave me the Chicken Pox when I was about 40. It was a Mother's Day gift. Terry had it when he was little and has the shingles twice in the last 20 years. It's amazing that they have medications now that healed the last recent break out in 5 days. Hope your other son does not get it, but it's a lot easier to deal with when you are young and not 40 like me.
xx, Carol

Take care of yourself!!!

Crocus will push up through the ice and snow to bloom. They are great flowering bulbs and one of the earliest to bloom. Love them!! I should see if mine are coming up, too!

Oh darling! I am very sorry that the chicken pox has visited you, but I am glad to know that Sam is evolving well.
I hope that you will be rested soon.
I like the changes in your room. A room is to live and enjoy, it is not a museum. So it's good that it changes continuously, just like us.
I wish you all kinds of blessings. A big hug.

Oh Allie, I feel for you. When my two were young My son had a compromised immune system. We tried to keep both of them away from anyone who might be contagious with anything. My daughter came down with the chicken pox when she was 15 and she got it really hard like Sam. My son did catch it from her but his case was milder. I had had them as a child myself. But then two and a half years ago I got shingles. I was lucky enough to get them on my back AND on my abdomen. The residual pain from them went on for months. The chicken pox virus is just a nasty one. I will be praying that your older son manages to escape it. I will also be keeping you and Sam in my prayers. Enjoy your re-arranged sewing room. It really looks so nice.

Feel better all of you!!! Am thinking and praying for all three of you! Hope your oldest doesn't get it either! The sewing room looks great! Love and hugs!

I am sorry to see you have been ill. I love the pictures of your sewing room!
Karmen

Wow, er for chicken pox! That's rough, so sorry this visited you. Wonder where he came in contact with it. Just take all the rest you guys need, and you'll be up to snuff in no time. Your little crocus are so sweet....they'll be fine in the snow (and btw, I think those green leaves are vinca). Take care, Girl. Keeping you in my prayers. Hugs.

You've got crocus up looking about, Allie. A little brightness for you amidst the stress!

Oh my goodness on the chicken pox.... I hope all is better by now. I recently rearranged my sewing room and it's the best set up I've had yet. Once I realized I didn't have to look out the window while I sew, I moved things into a more useful pattern!

Chicken pox sounds pretty serious for older-than-children people! How weird they'd get that - or you. I had it when I was little and don't recall it being as onerous as Measles. Paul 3 had it when he was about 4, and he was feeling pretty lively, but itchy! I guess when it hits an older person, it is more virulent? I thought all children had the vaccination now. I'm glad you are all through it, and hope your older son didn't get it, too.

I didn't know it could get in the spinal fluid...:( Glad he is doing better.
บาคาร่าออนไลน์