I've been very, very slow in getting back to stitching after our Texas trip.  I'm not sure why - or exactly how I've been filling my days, except for cleaning - but I'm finally getting back to it. 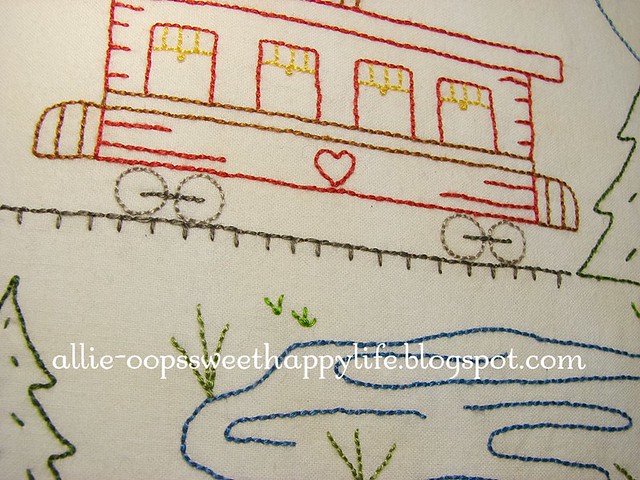 I finished writing a new pattern tonight, just waiting on the photoshoot tomorrow, please oh please let the sun come out.  This is a design that's been in my head for over 20 years!  I'm so glad to get it out and un-clutter my brain a bit.

And do you remember this? 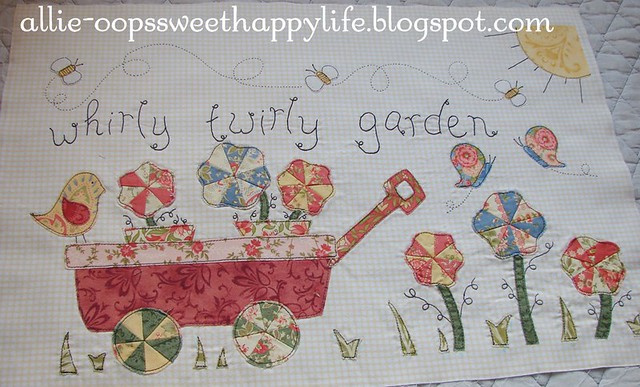 I had started quilting it, hated it, threw it out and last night I re-drew it as a stitchery.  Oh the bliss - I love it much better. 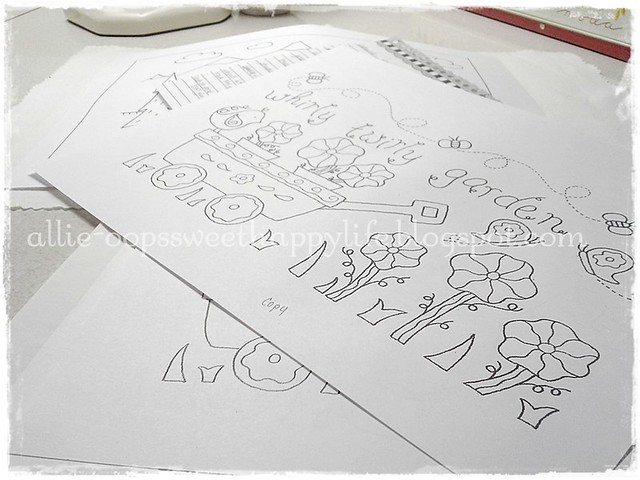 One thing I have been doing over the past couple of weeks, is thinking about my little design business.  Re-defining my goals, solidifying what I want to make - and I've come to the conclusion that what I really love is hand embroidery.  Taking a drawing and seeing it come to life with needle and floss is my greatest love.  I also love coloring it in with crayon, so you'll see more of that!  I still do love applique, and I'm sure there are more applique quilts in my future, but embroidery is my passion.  It feels good to finally acknowledge that, to see myself a little more clearly.

I've also been able to get around and visit you all a bit - what fun that was!!!  I'm not planning any more trips in the near future, so I'm sure I'll be around a bit more and won't get another 500 posts stacked up in my reader - lol!

I may have mentioned last post that my favorite highlight from the trip was meeting Billie and Mick, of Billie Bee's blog.  I wanted to bring her a gift, so I drew a frame design and added a portion of my favorite bible verse. 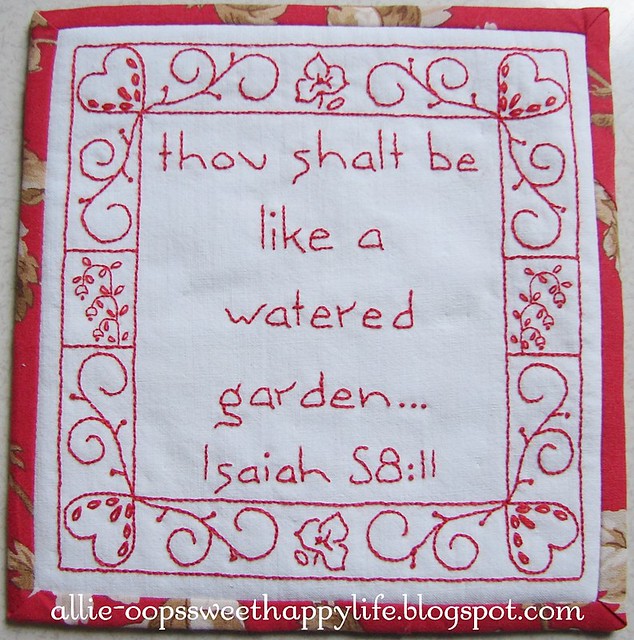 And the LORD shall guide thee continually, and satisfy thy soul in drought, and make fat thy bones: and thou shalt be like a watered garden, and like a spring of water, whose waters fail not.  Isaiah 58:11

I've uploaded the design to my craftsy shop as a free download. 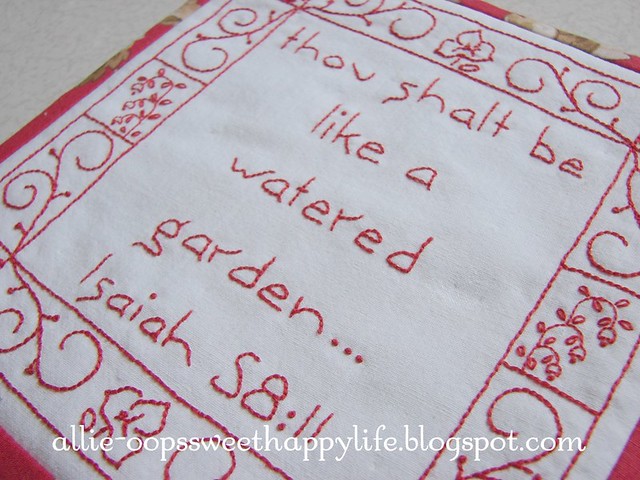 I hope it blesses you.
Love,
Allie

Whew what a trip it was - 1400 miles to Austin Texas!  Not a lot of pics, I forgot my camera everywhere we went.  This is what greeted us: 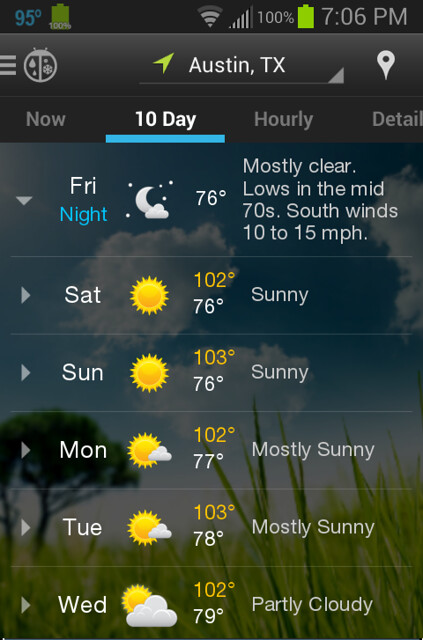 Oh. My. Goodness.  Was it hot.  Austin is a walking city, not great for driving, so I left the car parked - plus we'd picked up a horrid grinding noise outside of Waco on the way in, which continued all the way home, and turned out to be the brake rotors.  Thank God we still had brakes when we got home.

The biggest highlight of the trip for me was meeting Billie and Mick, from BillieBee's blog.  Two nicer people I have never met.  They took me out to lunch at Threadgill's, an Austin icon, where Janis Joplin got her start - very interesting history!  I could have sat and talked to Billie and Mick all day, felt like I knew them for years and just loved them to pieces.  Mick even bought me a t-shirt from Threadgill's, which I'm wearing right now, and Billie got me some gorgeous floss, fabric and floss holders - no pics, I sprained my ankle and am too lazy to get up. 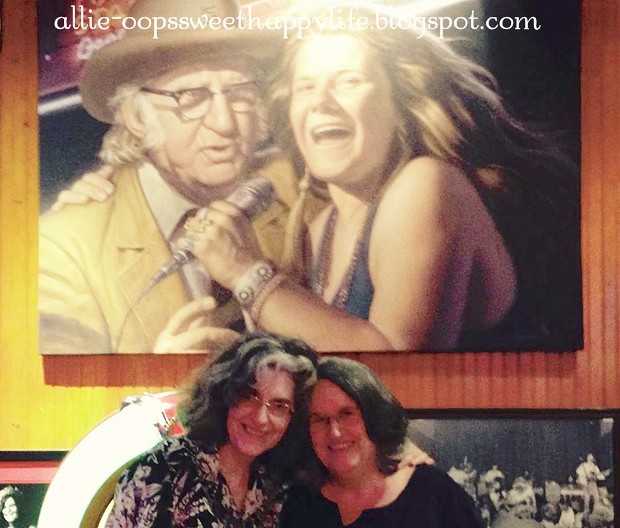 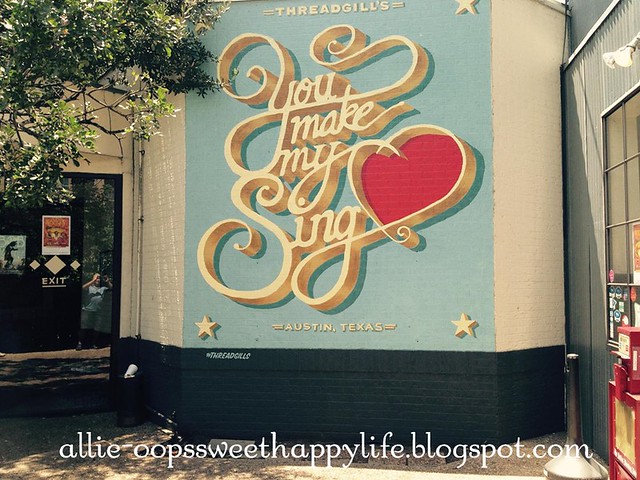 That evening, Sam's best friend's dad took us out to eat at Ironworks Barbecue - oh my gosh yum. 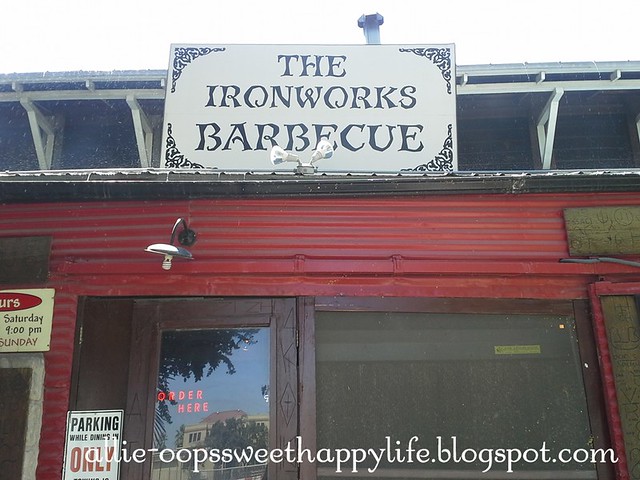 The only downside to Ironworks is that they had NO AIR CONDITIONING.  I know.  I couldn't believe it either.  But the food was great! 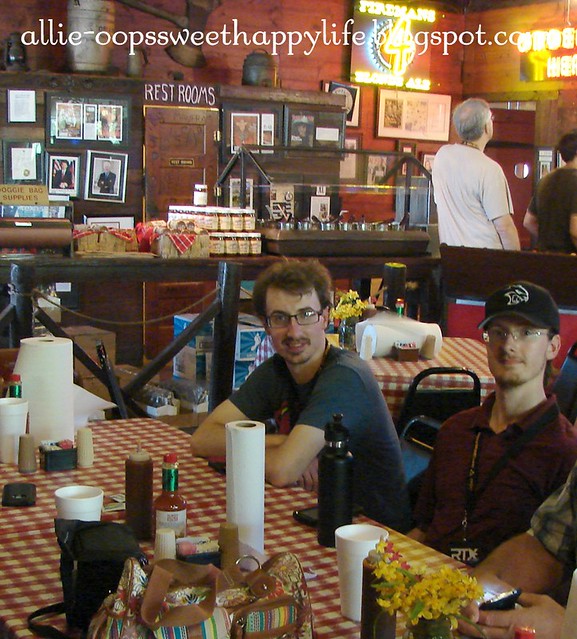 John and Sam - I cropped out Jordan and his dad, not sure if they wanted to be blogged, lol.

I highly recommend the La Quinta Capitol hotel, where we stayed.  Not a single bug, even outside at night on the terrace.  This is the view from the terrace - 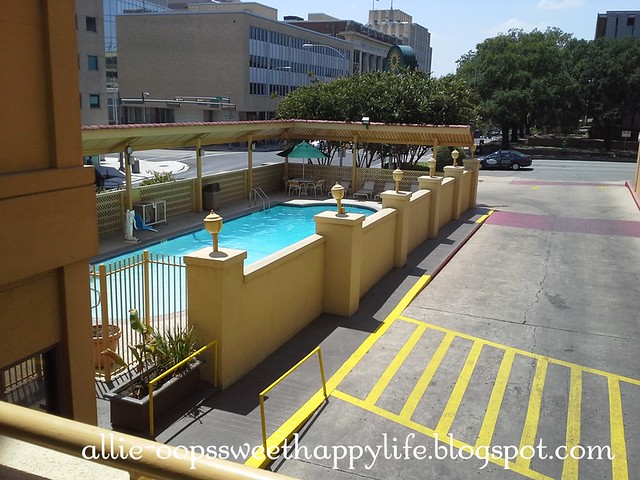 Rare that the pool was empty.  Comfy beds, tons of restaurants that delivered, it was lovely.

The capitol was a block away, so I braved the heat and took a walk over there.  I almost passed out by the time I got back, but it was so pretty.  Yes, I forgot my camera, had to use the phone. 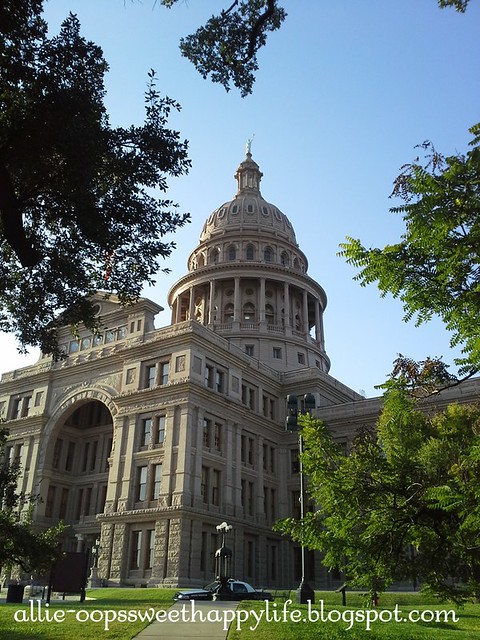 Sunday night, Sam had left with his friend to go back to Dallas, he's staying a bit longer.  John and I went and had dinner at the Radisson hotel next to the bridge where the bats live, right on the Colorado river - best cup of coffee I've ever had in my LIFE. 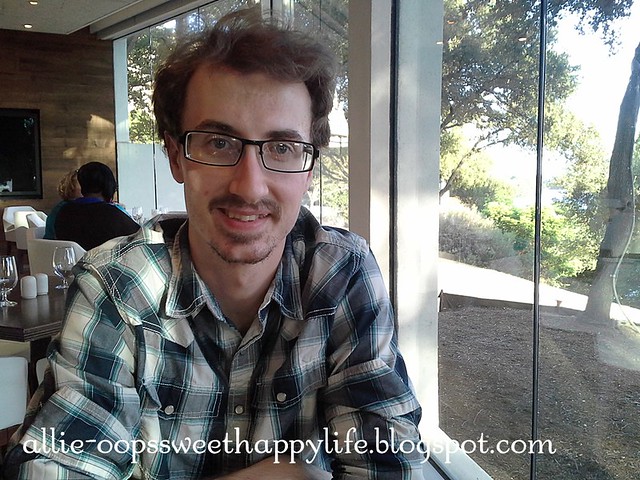 After dinner, we walked over to the bridge to join all the hundreds of other people waiting for the bats to fly out.  Austin is home to the world's largest urban bat colony, it's incredible. 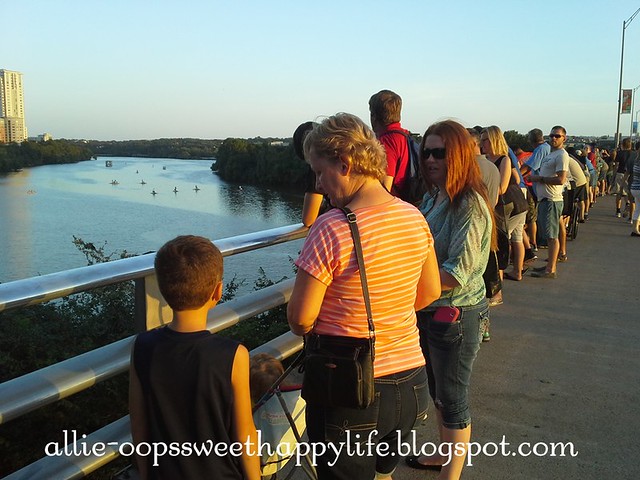 Oh my goodness that was worth it.  It was an amazing sight.  As usual, I forgot my camera, so here's an awful picture - the "smoke" in the sky is millions of bats, after they'd come out from under the bridge. 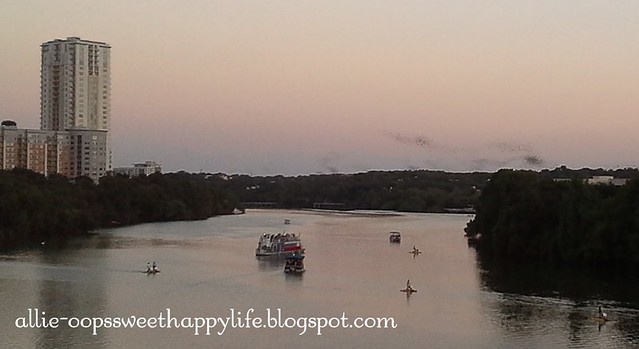 We ended up walking back to the hotel, it was dark but the temps were still in the 90's - I thought we'd never get there.  I had Fred Flintstone feet, they were so swollen.  But it was nice seeing the city!

I have to include a pic of a Texas rest stop - the silo's are the men's and women's bathrooms, they were very nice!

So we're home now, unpacked and resting.  I slept for 16 hours last night.  I still feel like I'm in the car.  I sit down at my table and reach for my seat belt.  I love Texas, I lived there for 5 years back in the 80's and it was so nice to see it again.  You won't meet nicer people anywhere [except in Canada!].

I'm going to go rest my sprained ankle and maybe sleep some more - I'm so far behind on your blogs that I'm not even going to try to catch up.  Maybe in the next week or two I'll be able to.  Looks like I'll be planted in my chair anyway, lol....see you soon! 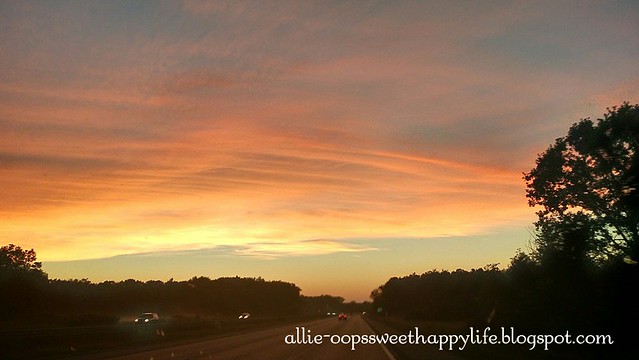