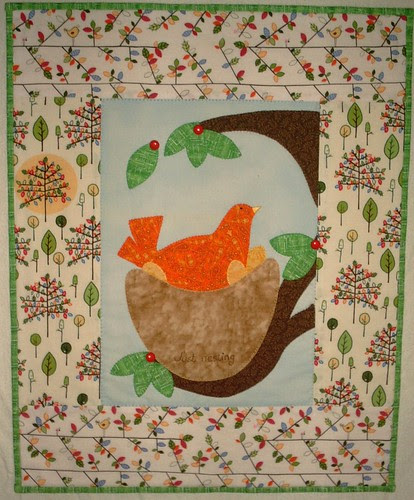 Today I finished a new project.  Jenny from Elefantz sent me some Aussie mags [bless her heart!] and this was in one - it's her project - the magazine is Creating Country Threads Vol 10 No 6.  You can see her post here.   All my organizing and punch needle practicing came to a screeching halt when I saw this - the fabric scraps were flying and I had to hunt down my fusible.  The fabric I used for the borders was something I had in my stash, one of those that you have to have but no idea why.  This was perfect! 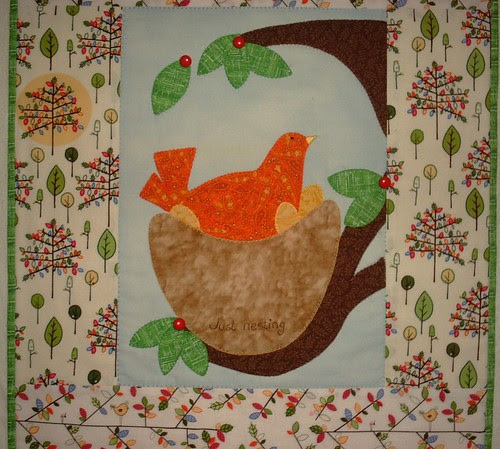 But of course, it has some oops.  I got all the pieces fused on and realized I'd forgotten to trace the stitchery part.  Jenny has the words in the lower branch - my fabric decision for it was too dark to show stitching, so I decided to do it in the nest.  Unfortunately, I couldn't see through it, so I had to draw it myself.  It's ok, but Jenny's would have been better. 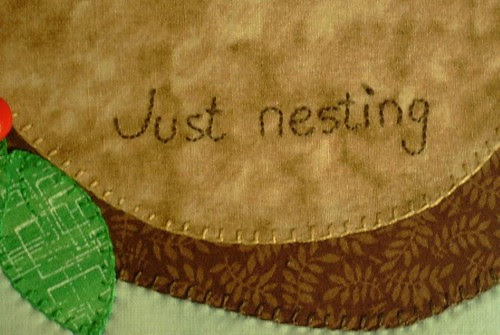 This is the border fabric. 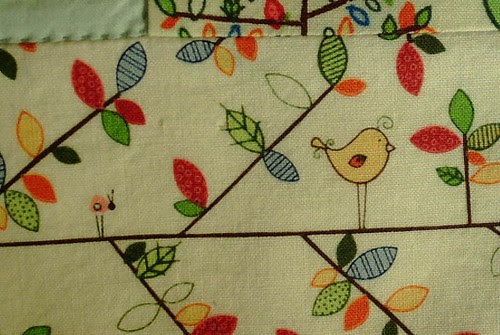 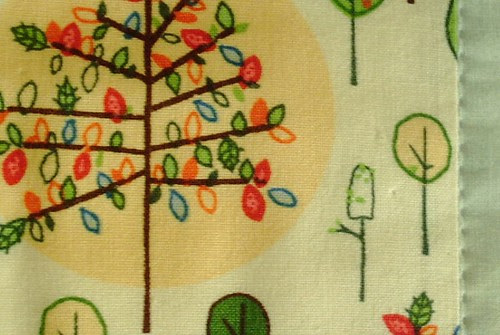 I really love this little wallhanging, thank you Jenny for another fabulous design - and for sending those magazines!

Did you see the US/Canada hockey game?  *sob*  There's only one player I really, really dislike in the entire roster - and that's Crosby.  Even before he scored the gold medal goal.  [If you know any history of the Detroit Red Wings and the Pittsburgh Penguins you'll understand.]
The closing ceremonies should be good tonight!  And on that note, I would like to say a great big


THANK YOU CANADA!
Canada, you are an amazing country - kudos for doing such a grand job hosting the Olympics.  The absolute nicest people on the planet.  I'm so glad we're neighbors.


*EDIT*  Jenny has now made the Just Nesting pattern available HERE, in her Etsy shop!
Posted by Allie at 7:06 PM

Hey neighbour, I love your little wall hanging. The border is absolutely just perfect for it too. Awww, don't be so hard on the 22-year old from Coal Harbour Nova Scotia. He's only doing his job.

Oh Allie - it's wonderful! You did a great job with the applique - and that border fabric is perfect! Very nice work!

Your Just Nesting is beautiful! I can't believe you had that perfect fabric in your stash! :0)

Anne at Film and Thread said...

Your border fabric is SO cute. The whole thing is adorable and I can't believe you whipped it up so fast. We didn't watch the hockey, but we spent a lot of time watching curling!

What a great wallhanging Allie! Isn't it so fabulous to grab a fabric from your stash and have it be so perfect? It couldn't be any cuter :o)

Allie, I love your nesting!! The border is PERFECT!!! LOVE it!! And thank you for all the nice comments about Canada and Canadians!! We love you guys too!! It's too bad they couldn't have left it as a tie-that way everyone would be wearing gold!!
Take care!
Paulette

This is so adorable. You did a wonderful job!!

I love EVERYTHING about your Just Nesting...and especially the FABRRIC!!! Wonderful~

Wow - it's as though that fabric has been waiting for this project!! How absolutely perfect!! I love your fresh touch Allie-friend - always, always so talented!!!

Too cute!! I love that border fabric-- you were right about it being perfect.

That's SO cute, Allie! I will have to hunt out my copy of the mag and make it; I love birds. Love those border fabrics. Thanks for your comment on my stitchery; only 1 thing finished for the month - what have I been doing??? Keep well, keep smiling.

Wow it looks great , that fabric is perfect for it !

This is adorable! I love your fabric choices!!! :)

That is such a cute wall hanging Allie. Jennie is such a generous person, and so talented.

What a great project so cute.

So cute and adorable - I love the border fabric, its just perfect.

I love this design!!! So happy and cheerful and celebrating a love of home :) It's beautifully done and I never can see your "oops"!!!

Soooo cute!! You are right...the border fabric is perfect...it really sets the tone for the whole wall hanging....DIVINE!! :D
I was busily cleaning my sewing room when I was "forced" to stop and watch the game!! ;) I haven't watched hockey in years..and my husband has never really watched so I was asked about a ZILLION questions and told several times how confusing it is..why are there only 3 "quarters"?...what is a power play...why do they keep delaying offsides, where is the 15 yard penalty...needless to say it was a VERY exciting game and well played by both teams!!! But yeah....BIG SOB!! xo

Your wall hanging is just too cute! Love the border fabric and the applique is great!

This is ADORABLE..I love it all, the fabric, the pattern...too cute.

I love Just Nesting. How adorable. You are so lucky to have that border fabric. I love it and it is perfect for the center design!

Allie this one is so cute! The border fabric is just fabulous. I think the "just nesting" on the nest looks great. Well done! I can't believe how much you are able to accomplish.

Really great job....I came over via Jenny's blog as she wrote about you....your piccies are amazing...that fabric certainly is perfect for it!
Jenny's great isn't she???
sugary hugs :O)

I lovet his quilt! You did a wonderful job!

Allie, that is so cute. You know I like anything with birds on it. Love your version.

Allie, this is absolutely adorable! I especially like the border fabric.

what an adorable pattern and quilt! It's making me want spring to come a wee bit sooner!

What a darling quilt, Allie -- I can see why you were excited to share the photos. I can't believe you had the perfect border fabric in your stash -- I love it when that happens!

You did such an amazing job! Way to go Allie!!!

Hahaha, Allie - from one night owl to another! :) Thanks for the menu planning tip. I will have to start doing that.... :)

I have always been a night owl, staying up to finish up homework ever since I was 12.

Wow. Is there anything that you cannot do????

This is adorable and reaffirms my hope that spring will soon be here!

What a cute wallhanging! You're trying to encourage Spring too! I think your words look great, and yes, that border fabric is Just Right! Love it! Isn't having a stash great?

Lovely littl quilt and you are right, the border fabric is just perfect.

Stunning! And the border fabric is just gorgeous :)

I love it Allie!!! You always do such an amazing job on your projects! And I totally understand that....'hmmm, now why did I buy this fabric?' thing. yep, I sure do!

Love the wall hanging! I can't seem to pass up tiny birdie print fabrics! This one is too cute!

This is a gorgeously cute wall hanging - and the perfect border fabric. Now you know why it was hanging around in your stash!